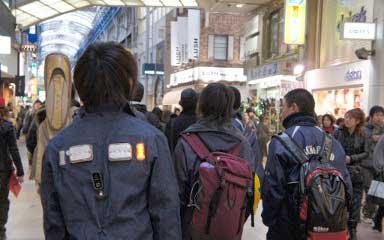 “There are many accidents such as bumping between walkers in crowded places. One of reasons for them is that it is difficult for each person to predict the behaviors of other people. On the other hand, cars implicitly communicate with other cars by presenting their contexts with equipments such as brake lights and turn signals. In this paper, we propose a system for visualizing the user context by using information presentation methods based on those found in cars, such as wearing LEDs as brake lights, which can be seen by surrounding people. The evaluation results when using our prototype system confirmed that our method visually and intuitively presented the user context. In addition, we evaluated the visibility effects of changing the mounting position of the wearable devices.“