Kees Moeliker will give one of the 2013 TED Talks, this week in California. Kees, an ornithologist and curator of the Natural History Museum Rotterdam, was awarded the 2003 Ig Nobel Prize in biology for his published study “The First Case of Homosexual Necrophilia in the Mallard Anas platyrhynchos (Aves: Anatidae)” [published in the journal Deinsea, vol. 8, 2001, pp. 243-7]. Kees eventually became (and remains) the European Bureau chief of the Annals of Improbable Research.

Presumably, Kees will speak about his research. Here is a photo of Kees’ TED badge: 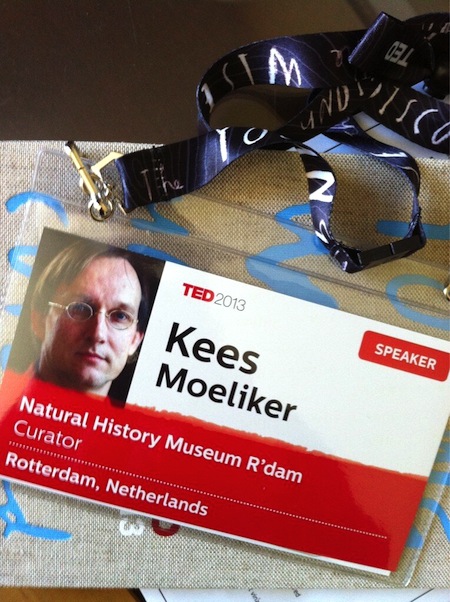 And Amanda Palmer, singer, composer, human statue, will give a TED talk this week. Amanda has at various points in her life been a performer at Ig Nobel ceremonies and also an organizer. She also, long ago, worked at the best ice cream shop on planet earth. Presumably, Amanda will talk about everything in the universe.

None of the other 2013 TED speakers has yet been awarded an Ig Nobel Prize or participated directly in an Ig Nobel ceremony.