The Edible Geography blog tells of an innovatively intense, focused approach to listening to people eat:

…in a paper to be published in June 2013 in the journal Food Hydrocolloids, scientist George A. Van Aken of NIZO, a Dutch food research company, reveals a new method of measuring mouthfeel: the wonderfully named “acoustic tribology.” Van Aken took a tiny contact microphone, packed it in polyethylene to keep it dry, and secured it behind a test subject’s upper front incisor teeth in order to record the acoustic signal produced by the varying vibrations of their papillae as their tongue rubbed against their palate.

In short, Van Aken’s device means that we can now listen to what our tongues feel.

The process works by picking up vibrations within tongue tissue, which vary depending on the amount of deformation the papillae experience when rubbing against the palate. To return to our initial experiment, you can actually listen to a recording of the feel of black coffee (mp3), and then compare it to the softer sound of the feel of coffee with cream (mp3) or hear them both back-to-back in this NIZO video (wmv) — from sawing wood to depilling a sweater, and back again, interrupted by an occasional higher-pitched pop (apparently, these are caused by the “snapping of salivary films and air bubbles at the papilla surfaces”)…. 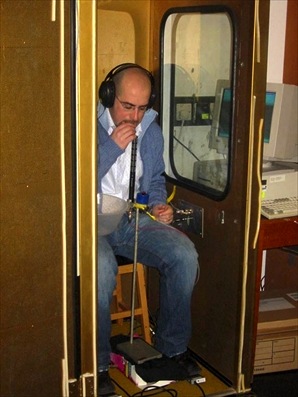 Edible Geography also discusses how this relates to the long series of experiments conducted by Charles Spence, who shared (with colleague Massimiliano Zampini) the 2008 Ig Nobel Prize in nutrition for electronically modifying the sound of a potato chip to make the person chewing the chip believe it to be crisper and fresher than it really is.

Zampini is pictured here, in the midst of that potato chip experiment.