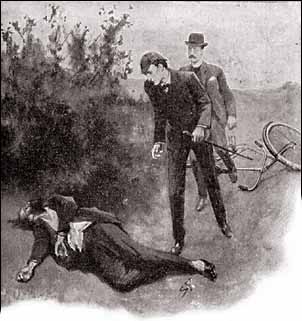 As Sherlock Holmes aficionados will know, in the 1903 story ‘The Adventure of the Priory School’, Holmes determined the direction in which a bicycle was travelling simply by observing the tyre tracks which it had made – asserting that the deeper of the two wheel marks must have come from the heavier rear wheel …

But in 1996 the essay Which Way Did the Bicycle Go?…and Other Intriguing Mathematical Mysteries. (Dolciani Mathematical Expositions Series of the Mathematical Association of America, No. 18.) authors Joseph D. E. Konhauser, Daniel J. Velleman, and Stan Wagon questioned the absolute validity of Sherlock’s methodology. They described what they saw as a better method of bicycle-track-direction-detection based purely on calculus – and independent of the depth of track.

To clarify, their diagram above shows a notional tyre track in which the heavier track was made by the front wheel.

But then, in 2002, a new twist was exposed. David L Finn, (Associate Professor of Mathematics at the Rose-Hulman Institute of Technology) determined (by the use of differential geometry) that it is theoretically possible to construct a unicycle track with a bicycle. See: Can a Bicycle Create a Unicycle Track?  (College Mathematics Journal, 2002). Thus the tracks which Holmes observed could have come from two bicycles instead of one. Considerably complicating the chances of solving what was an already tricky-enough case. 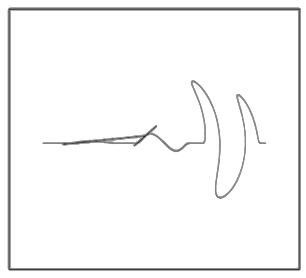 Professor Finn’s diagram above shows a mathematically generated version of a single tire track that can be created by a bicycle.

NOTE : Professor Stan Wagon, one of the co-authors of ‘Which Way Did the Bicycle Go?’ has designed, constructed and ridden a bicycle with square wheels. Here’s video of a tricycle built on Wagon’s principle:

ALSO SEE: There are two new (2013) books about the science of Sherlock Holmes, reviewed here by Jonathon Keats at New Scientist.