I’m going to be on NPR’s Science Friday program today. We’ll talk about one professor’s fascination with things that annoy him.

That professor has published nearly 100 reports about things that annoy him. The reports themselves are not annoying — each report is short (typically just one or two pages) and clear.

This segment will be at the end of hour 2 of the program. 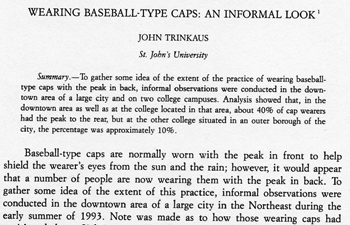 BONUS (October 20): A recording of the radio segment is now online.

BONUS: Professor Trinkaus was awarded the 2003 Ig Nobel Prize in literature for meticulously collecting data and publishing more than 80 detailed academic reports about things that annoyed him.