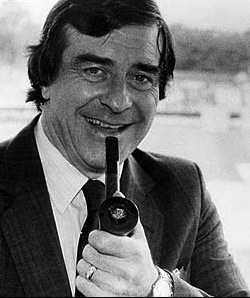 Look at this video of a man describing several activities. In the video [as in the still image here], the man holds a pipe in on hand. The question: Can you tell whether the man’s pipe is lit or not?

[UNRELATED NOTE: You will see that, in the video, the man himself appears to be lit.]

BONUS: The man is named Fred Trueman. Here’s some background on him [by Scott Murray, in The Guardian.