There once was a man who swallowed some ants.
‘Twas done with intent, not merely from chance.
The ants were alive,
But did not survive.
The research was done without government grants. 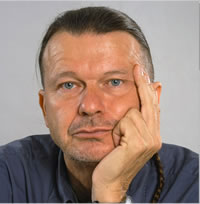 The man was and is Volker Sommer, [pictured here] professor of evolutionary anthropology at University College London. He and colleagues Oliver Allon and Alejandra Pascual-Garrido travelled to Nigeria’s Gashaka Gumti national park. There, chimpanzees and army ants and sticks are plentiful – the former use the latter to dip into nests for presumably delicious helpings of fresh, lively army ants of the species Dorylus rubellus. As the scientists describe it: “Army ants respond to predatory chimpanzees in a particular way by streaming to the surface to defend their colony through painful bites. In response, chimpanzees typically harvest army ants with stick tools, thereby minimising the bites they receive.”

The team craved more knowledge about this chimp/ant give-and-take. So they “mimicked the predatory behaviour of tool-using chimpanzees at army ant nests to study the insects’ response”….