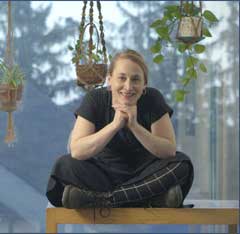 “There are not many of us doing vegetable philosophy, either professionally or casually.” – notes associate professor Karen L.F. Houle (from the Department of Philosophy at The University of Guelph, Canada) in a recent article for the Journal for Critical Animal Studies, Volume IX, Issue 1/2, 2011.

Her paper, Animal, Vegetable, Mineral: Ethics as Extension or Becoming? The Case of Becoming-Plant takes inspiration from examples given by philosopher Gilles Deleuze and psychoanalyst Felix Guattari in their 1980 philosophical text entitled ‘A Thousand Plateaus: Capitalism and Schizophrenia’, in which they explore the implications of a human ‘becoming-animal’ – and cite attempts made by artist/writer Vladimir Slepian  to make himself more dog-like by putting shoes on his hands.

“If I wear shoes on my hands, then their elements will enter into a new relation, resulting in the affect or becoming I seek. But how will I be able to tie the shoe on my second hand, once the first is already occupied? With my mouth, which in turn receives an investment in the assemblage, becoming a dog muzzle, insofar as a dog muzzle is now used to tie shoes.”

“In principle, becoming-plant would involve our extension and ideas entering into composition with something else in such a way that the particles emitted from the aggregate thus composed will verb vegetally as a function of the relation of movement and rest, or of molecular proximity, in which they can enter. Becoming-plant is the emission of particles from a heterogeneous alliance we make which expresses in action the unique qualities of plants or plant-lives.”

1 ½ Hr. BONUS For those interested in mysteries of vegetable-ness (and music) see the 1979 documentary film The Secret Life of Plants – with soundtrack by Stevie Wonder.