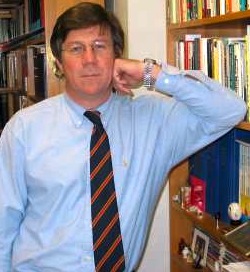 Sex clearly drives Britain and Argentina as they vie to dominate islands of interest. The two great nations are rivals in producing academic studies of whether and how people stare at women’s breasts or buttocks.

Britain fired the first shot in this war. In 2007, Adrian Furnham [pictured here] and Viren Swami of University College London published a report called Perception of Female Buttocks and Breast Size in Profile, in the journal Social Behaviour and Personality.

Professor Furnham is, by his own reckoning, one of the most productive academics alive, publishing many hundreds of papers in dozens of far-flung fields.

Professor Swami, now at the University of Westminster, also beavers relentlessly, both in Britain and abroad….

BONUS: “Adrian is the world’s most published psychologist“