Flora Lichtman’s video shows how two scientists connected eggs and milk to produce a pump. The video uses other, better ways to describe the situation. Click on the image, and be whisked to the Science Friday web site, to see the video: 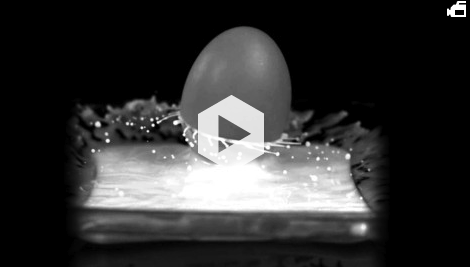 Some background info, from Science Friday:

When engineer Tadd Truscott was in grad school, one of his classmates at MIT suggested they spin an egg in a puddle of milk and film it with a high-speed camera. What they saw was a tiny sprinkler system: the milk rose up the sides of the spinning egg, shooting off at the egg’s equator. This became a household science experiment for Truscott and his kids, until one day he realized he didn’t know why the milk rises up the egg. Armed with a PhD in hydrodynamics, Truscott, now at Brigham Young University, and colleagues including mechanical engineering student Ken Langley, set out to crack the case.