“‘The real thing’: nominal price rigidity of the nickel Coke, 1886-1959“, Daniel Levy and Andrew Young, Journal of Money, Credit and Banking, (2004). (Thanks to Sandeep Baliga for bringing this to our attention.) Levy and Young write: 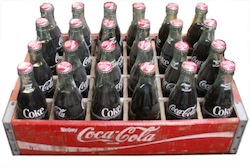 We report that the price of a 6.5oz Coke was 5¢ from 1886 until 1959. Thus, we are documenting a nominal price rigidity that lasted more than 70 years! The case of Coca-Cola is particularly interesting because during the 70-year period there were substantial changes in the soft drink industry as well as two World Wars, the Great Depression, and numerous regulatory interventions and lawsuits, which led to substantial changes in the Coca-Cola market conditions. The nickel price of Coke, nevertheless, remained unchanged….

We offer a combination of three possible factors as an explanation for the Coca-Cola price rigidity. Two of these explanations are technology-based, while the third has to do with an unusual contract the Coca-Cola Company signed. First, we demonstrate that an installed base of vending machines with nickel-only capability, and the evolution of the technology that could accommodate multiple type coins and change making, imposed an important constraint on the ability of the Coca-Cola Company to adjust the Coke’s price. Second, at the 5¢ price per serving, the smallest price increase compatible with the consumer still using a single coin was a 100 percent jump to 10¢. A monetary transaction technology for smaller price adjustment while keeping consumer “inconvenience costs” low in terms of the number of coins needed for purchasing a bottle of Coca-Cola, was not available.