Pat Robertson, who shared the 2011 Ig Nobel Prize in mathematics, has made a new prediction, this time about climate change.

Robertson won his Ig Nobel for predicting the world would end in 1982, thus (eventually) teaching the world to be careful when making mathematical assumptions and calculations. His co-winners each made their own erroneous predictions of specific times the world was going to end.

Pat Robertson: Global warming a hoax because no SUVs on Mars

Televangelist Pat Robertson on Tuesday pointed to the fact that there were no sport utility vehicles (SUVs) or oil refineries on Mars as evidence that claims of global warming on Earth were a hoax. Following a segment about how European climate change activists were like a “religious cult,” Robertson explained that he was “not a disciple of global warming… Just keep in mind that Mars, and say, ‘How many SUVs, how many oil refineries are there on Mars?’ And yet, it’s the relationship to the sun that is effecting the climate on Mars,” he concluded…. 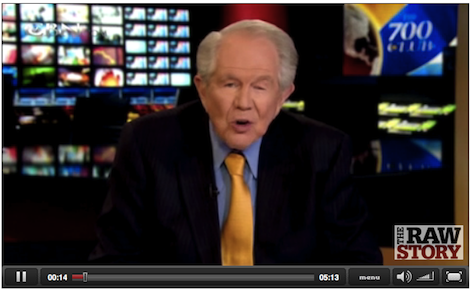