Washington, DC suffered a tiny rash of exploding toilets [or toilet—it’s unclear whether more than one exploded] “on or around September 26, 2011“, according to a report by Tom Nash of Muckrock:

Six months after what was probably the worst Monday of all time for two General Services Administration employees and the symbol du jour of broken government, documents requested by Jason Smathers have shed light on a restroom disaster deemed the result of an aging plumbing system and human error.

Shortly after the exploding toilet, which injured GSA two employees in Washington, D.C., few details beyond the fact that the injuries were not life-threatening made their way to media and bloggers hungry for metaphors of Washington politics…  Even the title of the final incident report included what one can only hope was a Washington-esque attempt at deadpan humor: “Domestic Water Incident summary.” View the Complete Documents

Here is one of the government docuements obtained (via the Freedom of Information Act) by Muckrock: 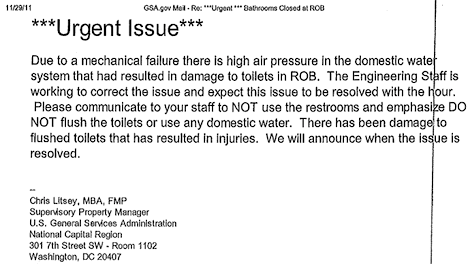 BONUS: The Ig Nobel Prize-winning report “The Collapse of Toilets in Glasgow“