Alexander Lerchl sent us this note:

In 2010 you wrote a piece [in the Guardian] on a paper by Salama et al. about the effects of mobile phone electromagnetic fields on rabbits’ sex life. I read it just now since it was mentioned in Esowatch.

Actually he published three papers with co-authors who were not informed about the submission of the manuscripts. During an investigation at the host institution it was found that no lab books existed.

Anyway, all three papers have been / will be retracted. I was the person who discovered the problems. 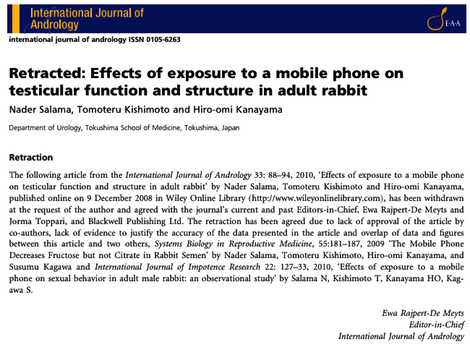 BONUS: Where is he now? In the retracted paper, Nader Salama lists his address as: “Professor N Salama, Department of Urology, Alexandria Faculty of Medicine, Alexandria 11111, Egypt.” However, he is not now currently listed on that department’s web site. In that same paper he also lists an affiliation with the “Departments of Urology, Tokushima School of Medicine, Tokushima City, Japan”.

BONUS: An unrelated paper by Salama and Kishimoto: “Unusual trivial trauma may end with extrusion of a well-functioning penile prosthesis: a case report“, which includes the statements, about two different patients: “He also reported having bumped his penis into the suitcase of the preceding passenger while boarding an airplane five days prior to presentation”; and “He also described having trapped his penis against a toilet seat while sitting down to defecate four days earlier.”