Just as certain computer scientists and engineers dream of doing better garbage collection in computers (for a dream come true, see Microsoft’s “Fundamentals of Garbage Collection“), scientists and engineers at Ecole Polytechnique de Lausanne dream of doing better garbage collection in space. Dead satellites. Detritus from collisions between now-dead satellites and whatever slammed into them. Junk that fell off or was discarded by astronauts and their ilk.

First they drew up plans for a cube seek, grab, and destroy satellite  called Swiss Cube. Now they have plans for a bigger, hungrier version that has a cleaner, less interesting name: Clean Space One. As they say it: “Swiss Space Center at EPFL just launched the “CleanSpace One” project. The aim is to design and build a satellite that will chase, grab and destroy a space debris – namely one of the first Swiss satellites, Swisscube-1 or TIsat-1.”

This video presents their intellectual case about their theoretical orbiting case:

(Thanks to investigator Gary Dryfoos for bringing this to our attention.)

BONUS: The team also made, or had made for them, a chocolate version of their first satellite. Here’s a photo: 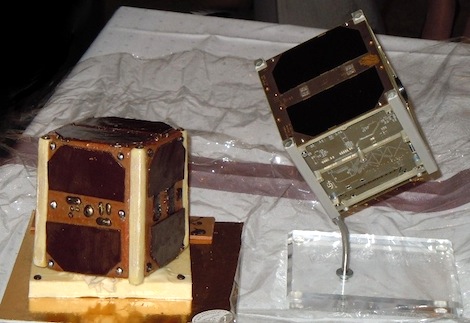