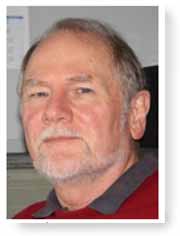 Sometimes, despite a common language, the meaning of a word or phrase can vary considerably from one geographical region to another. In the international arena, for example, there has historically been some ambiguity over the term ‘Hot Boning’. The confusion was largely cleared, however, by a 1993 research article by W. (Bill) F. Spooncer.(Recipient of the 2005 Ron Lyon Award of the Australian Renderers Association.) Bill explained that :

“In Australia, hot boning usually means boning carcasses that have a deep-butt temperature of more than 20°C”

“In other countries, particularly in the European community and New Zealand, hot boning means boning carcasses as they come off the slaughter floor, without any carcass chilling. In this case the deep-butt temperature would be 40° – 42°C. The common practice in Australia is to chill the carcasses for a short time, for example until the deep-butt temperature is 30° – 35°C before boning starts. This practice may be called ‘warm boning’ or ‘boning on the curve’ or ‘same day boning’ to distinguish it form the European idea of hot boning” 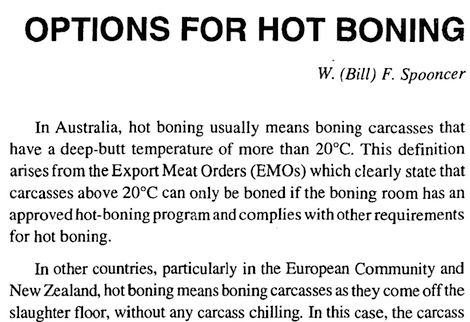