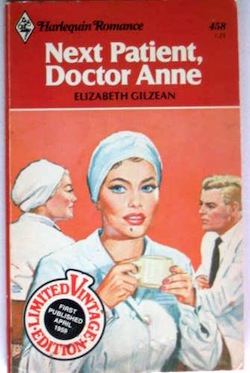 How realistic are the medical practices in medical-themed romance novels? Dr. Cornelis H. (Kees) Langeveld investigated. Dr. Langeveld chose to publish his results in a medical journal, rather than in a romance novel. His study is:

OBJECTIVE: To investigate whether doctors novels give a realistic picture of medical practice.

CONCLUSION: The doctors novels which were studied give an unbalanced and distorted view of medical practice. The medical information was sometimes incorrect, partly due to lack of knowledge by the author, partly due to incorrect translation from English. The reality of medical practice was not represented accurately in either of the series investigated, although the medical information in the ‘Doctors novels’ series appeared to be accurate more often than that in the ‘Dr. Anne’ series.

(Thanks to investigator Al Lurtsema for bringing this to our attention.)