By tradition and for other reasons, some mathematicians spend some of their time wondering whether stress causes some of their sleeplessness or all of it, or whether coffee causes all of their sleeplessness or some of it, or whether they should direct their worry partly or fully toward something else. Next week, at a conference (the 2012 Joint Mathematics Meetings, at the Hynes Convention Center in Boston) several mathematicians plan to present their tentative findings on this multifarious question: 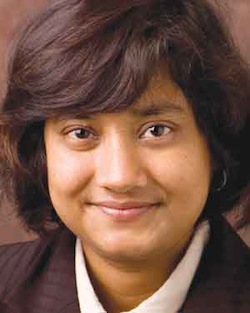 “Caffeine is the most widely used psychoactive drug in the world. One objective of this study was to see what eects, if any, caffeine consumption had on depression, state anxiety, and stress levels of Clarkson students. A second objective was to examine the relationship between the previously listed psychosocial attributes and the participants’ reported average hours of sleep and quality of rest. In Phase one of this study, cross-sectional data was collected via survey from participating students in an Introductory Psychology course at Clarkson University. Phase two of this study examined longitudinal data on sleep, caeine consumption, and psychosocial factors over an 8 week period of time from a subset of students from Phase one. Mixed eects models were used to determine the association between predictor variables of caffeine consumption, average hours of sleep, how rested the participant felt, age of the participant, and sex of the participant, and response variables of stress, anxiety, and depression. Data analysis showed a stronger correlation with stress, anxiety, and depression for average hours of sleep or how rested the participants felt versus the amount of caffeine consumed.

BONUS: Likely the most famous thing any mathematician has said about coffee is “A mathematician is a device for turning coffee into theorems.” By most (though not all) accounts, Paul Erdos was the mathematician who first said it. And meant it.

COFFEE TIME BONUS: For more about Erdos, read the book The Man Who Loved Only Numbers: The Story of Paul Erdos and the Search for Mathematical Truth

BONUS: “A topologist is a mathematician who can’t tell the difference between a coffee mug and a donut — both are surfaces of genus 1. This Demonstration shows a continuous deformation-known as a homeomorphism-of a coffee mug into a donut, then back to a coffee mug.” So say the makers of this video: