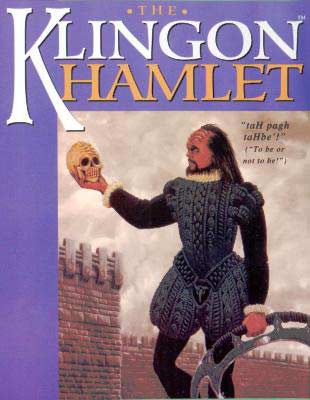 “taH pagh taHbe’. DaH mu’tlheghvam vIqeInIS.” – the translation of which, as speakers of Klingon will know, is “To be or not to be; that is the question.” The Klingon Shakespeare Restoration Project has received considerable attention from academia – see for example:

‘Adapting Shakespeare for Star Trek and Star Trek for Shakespeare: The Klingon Hamlet and The Spaces of Translation‘ (Studies in Popular Culture, vol 32, no. 2, pp. 35-55.) The author, Dr. Karolina Kazimierczak (Researcher at the Academic Urology Unit, University of Aberdeen, Scotland.) explains –

“The Klingon translations give evidence of how the popular culture, with its re-enactments or reinterpretations of the official or high culture texts and practices, helps to uncover the mechanisms of cultural and linguistic alienation and re-appropriation, while posing the boldest challenges to its audience’s ability to suspend disbelief.”

Further reading:
Shakespeare in the Original Klingon: Star Trek and the End of History, by professor Paul Cantor, at the Department of English, University of Virginia (Perspectives on Political Science, Volume 29, Issue 3, 2000)