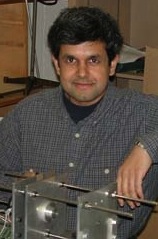 Crumpled paper fascinates physicists, most of whom nevertheless continue to throw away most of the paper they crumple. But some do pause to analyze what they’ve wrought. Wired reports about a recent case of this:

“Crush a piece of typing paper into the size of a golf ball, and suddenly it becomes a very stiff object. The thing to realize is that it’s 90 percent air, and it’s not that you designed architectural motifs to make it stiff. It did it itself,” said physicist Narayan Menon [pictured here, without paper] of the University of Massachusetts Amherst. “It became a rigid object. This is what we are trying to figure out: What is the architecture inside that creates this stiffness?” …

Of course, it may seem surprising that a balled-up sheet of paper or foil should contort itself beyond knowledge. But Menon noted that when physicists finally described the precise dynamics of conical crumpling, which you can achieve by laying a sheet of paper over a coffee cup and poking down with one finger, it was regarded as a mathematical tour-de-force.

That tour de force was performed by a team that includes Enrique Cerda and L  Mahadevan, co-winners of the 2007 Ig Nobel Prize in physics for their work (related to all the paper-crumpling work) in analyzing how sheets get wrinkled.

“Three-dimensional structure of a sheet crumpled into a ball.” Anne Dominique Cambou and Narayanan Menon, Proceedings of the National Academy of Science, vol. 108, no. 33, August 23, 2011.

(Thanks to investigator Alexey Eliseev for bringing this to our attention.)