In the race to top the top, to build a tall building that’s at least momentarily taller than all the other tallest buildings, a two-part question lingers. These towers are so costly, and the real estate market so unpredictable, that one or more of these buildings could turn out to be financial failures. Then might arise (ironically) the need to tear down a tall, tall tower.

QUESTION: How would one disassemble one of the tallest skyscrapers without risking huge damage to its neighborhood? And how would this work financially, if the tower needs be disassembled *because* the owners ran out of money?

This question is of course theoretical, presented as a fun exercise for engineering students and finance students. Here is an Associated Press report about the newest tower:

Saudi Arabia took a key step forward Tuesday in its plan to build the world’s tallest tower and outdo Gulf neighbour Dubai, which inaugurated its own record-breaking skyscraper less than two years ago. The Saudis awarded a more than $1 billion contract for a spire that will soar two-thirds of a mile high, to be named the Kingdom Tower. It will have a Four Seasons hotel, serviced apartments, luxury condominiums and offices, encompassing, in all, about 5.4 million square feet. The plans make Saudi Arabia a front-runner in the race between the oil-rich Gulf nations for glitzy, architectural trophies that dot their desert territories with glimmering skyscrapers and elaborate, man-made islands.

This image of the planned Kingdom Tower is from the architects: 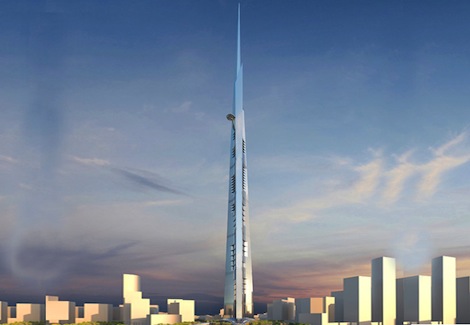