Bison and tires figure together in a University of Arizona research project. The university’s press release says: 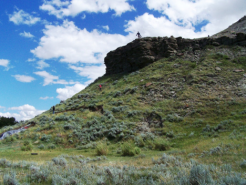 Researchers rolled tires over a 25 meter slope above the cliff and used a stop watch to determine their speed in an attempt to approximate the speed of a running bison.

Based on the tire model, UA doctoral student Matt Pailes, a member of the team, estimated that running bison could have been airborne for a couple of seconds and landed as far as 10 meters from the cliff edge.

“It was a great idea because tires and bison are heavy enough that they behave alike when they fall,” said Jesse Ballenger of Statistical Research, Inc. and the project’s co-director.”  [The photo here is by Maria Nieves Zedeño, supplied by the university.]

BONUS: Video of a tired bison running after a tired truck: