Polymath in Residence at Brooklyn College

Do chickens prefer attractive people? The answer is yes, according to Stefano Ghirlanda, the new Carol L. Zicklin Chair in the Honors Academy at Brooklyn College. 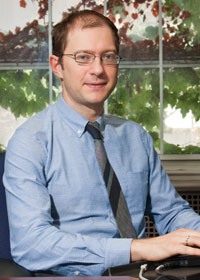 A researcher on the psychology faculty of the University of Bologna, Italy, Ghirlanda joined the college community in September, and this spring is the host of a guest lecture series, the Cultural Evolution Seminar, at the Honors Academy. Best known, perhaps, for the book Neural Networks and Animal Behavior (Princeton University Press, 2005) he coauthored with Magnus Enquist, Ghirlanda has also won the 2003 Ig® Nobel Prize, “for achievements that first make people LAUGH, then make them THINK,” by demonstrating that chickens have a preference for attractive people….