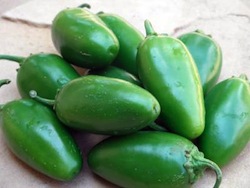 Ig Nobel Prize winner Paul Bosland has bred yet another surprising jalapeno pepper. Professor Bosland, director of The Chile Pepper Institute, New Mexico State University, was awarded the 1999 Ig Nobel Biology Prize for breeding a spiceless jalapeno chile pepper. The newly announced pepper (which is not spiceless) is meant to have an impressively large interior suitable for stuffing with large amounts of cheese. A press release explains:

The New Mexico State University chile pepper breeding program recently announced the release of a large-size jalapeño pepper dubbed ‘NuMex Jalmundo’. According to Paul Bosland, Department of Plant and Environmental Sciences at NMSU and co-founder of the nonprofit Chile Pepper Institute, “the name Jalmundo is a contraction of jalapeño and the Spanish word for world (mundo), implying that it is as big as the world.”

(Thanks to Maggie Koerth-Baker for bringing this to our attention.)