… asks Peter C. Sundt, BSc. in the latest issue (june 2010) of the journal Elevator World (page 114). Although the article is ‘subscribers only’, an earlier essay by the same author on broadly the same subject (with the same title) is available online here, via The Structural Engineer.

“Most agree that the Great Pyramid at Giza, the last remaining Wonder of the Ancient World, was an amazing job of construction. It’s a great pity, though, that the Egyptians left little or no records of how they did it.” 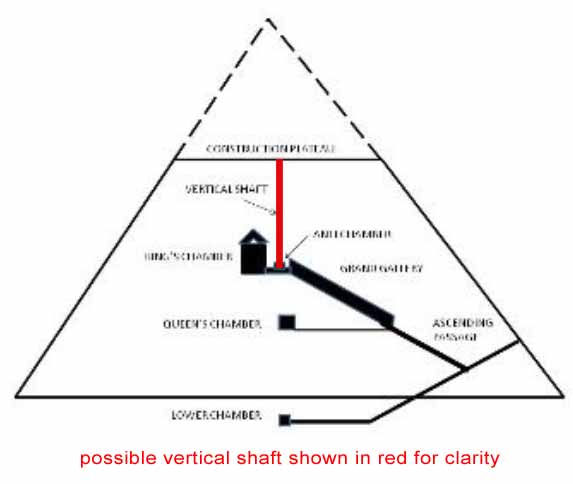 It is certain, however, that huge granite blocks were somehow moved into their final positions. Some scholars have suggested the use of giant stone-bearing sledges which were hauled up ramps –  perhaps not a very efficient method, but as Sundt points out –

“One might argue that cost and efficiency were of no concern to the pharaoh, and regardless of the waste in material and labor, a simple brute force ramp all the way to the top was the way to go.”

Thus, to the pharaoh, cost might not have been an important consideration, but –

“…time was very much a concern, for it was imperative to finish the pyramid while the pharaoh was still alive.”

The author presents a new hypothesis which might have helped to speed things along –  perhaps an ‘elevator’ could have been used in conjunction with the ramp. In this scenario, a ‘plateau’ formed at the top of the part-built pyramid (see dwg.) provided a platform where four teams of workers –

“… pulled in unison and hoisted the sledge up the vertical shaft. It is estimated that a total of 40 men, divided into four hauling teams, would be able to lift a 2 ton load to the plateau at a velocity of 30m per minute.”

In time, perhaps physical evidence for the elevator’s existence might be found.