Some business signs in London (of which more can be found in part 1), these from Ballou’s Monthly Magazine, June 1861: 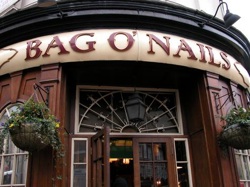 A stranger is surprised in London by some of the signs, which have been handed down for generations, which are used to distinguish particular places of business. Many of them are perfectly unmeaning, but are corruptions of the original signs. A public house was called ‘The Bag of Nails,’ which was derived from the old name, ‘The Bacchanals.’ ‘The Bull and Goat’ was corrupted from ‘The Bologne Gate,’ as the place was called in compliment to Henry VIII, who took the place in 1642. There is another public house called ‘The Goat and Compasses.’ It was established in the old Puritan times. In the days of Cromwell, it was ‘God encompasses us;’ but in Queen Victoria’s time it is ‘The Goat and Compasses.’ There is one public house called ‘The Three Loggerheads.’ The sign has a picture of two men, and the inscription underneath:

‘We three
Loggerheads be.’

And the passer by wonders, as he reads it, where on earth the third loggerhead can be.