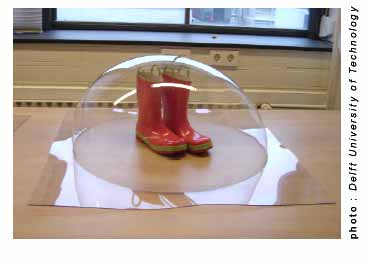 “The effect odor has on a consumer’s experience of the product is still not yet understood.” Prompting investigators at Delft University of Technology in the Netherlands to set up two experiments in order to clarify the possible influences of odor on consumer goods. Their research took an unusual approach, centring around what they call ‘incongruent odors’ – perhaps simply described as merchandise with ‘the wrong smell’.
For example, a pair of plastic wellington boots (see photo) was treated with a ‘rose-like’ smell and, along with other incongruously odorised items, were then exposed to test subjects in various carefully controlled ways.
The experiments had turbulent and unexpected results – for although subjects generally didn’t like, say, the banana-flavoured alarm clock, several sniffers highly rated the ‘incongruent odor’ of the boots. Prompting the research team to observe: “The present outcomes might suggest that scent hardly contributes to product liking.”
Despite the unforeseen results, however, the authors caution against completely abandoning the idea that (product) smell matters. “Even though the effects of odor appropriateness or inappropriateness were not demonstrated in the present study, it would be unwise and premature to conclude that the scent of products is unimportant.”
Their article ‘Should Mary Smell Like Biscuit?‘ is published in the latest issue of the International Journal of Design, 3(3), 1-12.