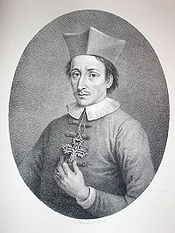 “In 1659 he decided not to accept anything simply written in a book, instead resolving to do research himself,” says Wikipedia about the now-late Bishop Steno, and goes on to give other bits of his history:

Steno’s landmark theory that the fossil record was a chronology of different living creatures in different eras was a sine qua non for Darwin’s theory of natural selection. Another principle, known simply as Steno’s law, or Steno’s law of constant angles, states that the angles between corresponding faces on crystals are the same for all specimens of the same mineral, a fundamental breakthrough that formed the basis of all subsequent inquiries into crystal structure.

(Thanks to investigator Sylvie Coyaud for bringing this to our attention.)