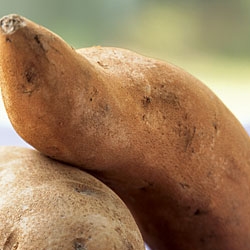 Vicar went to hospital with potato stuck in bottom

That’s the headline in a October 31, 2008 report in The Telegraph, which goes on to explain that “A vicar attended hospital with a potato stuck up his bottom – and claimed it got there after he fell on to the vegetable while naked…. The clergyman, in his 50s, told nurses he had been hanging curtains when he fell backwards on to his kitchen table. He happened to be nude at the time of the mishap, said the vicar, who insisted he had not been playing a sex game.”