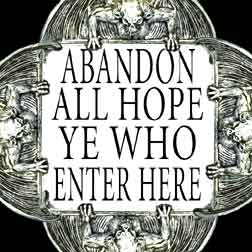 Ann Arbor, Mich. — Holding on to hope may not make patients happier as they deal with chronic illness or diseases, according to a new study….

“Hope is an important part of happiness,” said Peter A. Ubel, M.D., director of the U-M Center for Behavioral and Decision Sciences in Medicine and one of the authors of the happily hopeless study, “but there’s a dark side of hope…. Ubel and his co-authors – both from U-M and Carnegie Mellon University — studied patients who had new colostomies: their colons were removed and they had to have bowel movements in a pouch that lies outside their body….

The second group – the one without hope — reported being happier over the next six months than those with reversible colostomies…. The research was published in this month’s edition of Health Psychology.

—So says a November 2, 2009 University of Michigan press release.

(Thanks to investigator Alan Dove for bringing this to our attention.)