The authors (with one substitution) of the classic report “The Taxonomy of Barney” wrote a new report based on a sighting of a different creature. Here’s an excerpt:

The Barney organism was supposed to be a dinosaur, one which had a profound affection for (and affection returned by) juvenile humans. 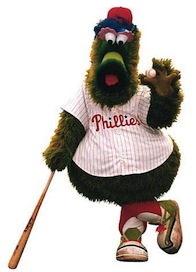 [In 1995] The researchers proved that the putative dinosaurian was not a dinosaur but a hitherto unknown member of the Hominidae, the same taxonomic family to which humans belong.  Most notably, X-ray analysis showed the Barney skeleton as hominid in morphology, not reptilian.  And further, the authors presented statistical evidence that Barney was taxonomically closer to dead salmon than even to the dinosaurs….

At this moment (October 2009), many Americans are seized by object fascination with the unpredictable movements of small white spheres; specifically. This is the combat known as the World Series of baseball, which this year pitches the New York Yankees against the defending world champions, the Philadelphia Phillies. As part of our research in this field of dreams, we here report the discovery of another bipedal vertebrate, similar to the Barney organism.

The Philadelphia Phillies and the team’s fans affiliate with a bipedal, vertebrate, fuzzy, green organism they informally name the Philly Phanatic…

Click here to download the full report in PDF form. The image below is from the original “Taxonomy of Barney” study: 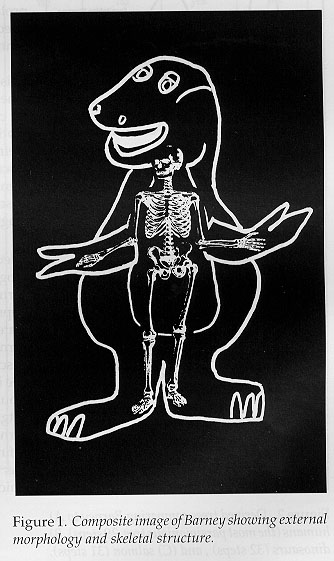