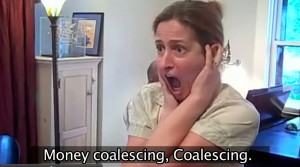 Big Banks and the Big Bang theory combine in these two new episodes (#122 and #121) of the Improbable Research TV series.

These were filmed at an early rehearsal of “The Big Bank Opera”. The plot:  Stylish bankers in a swanky Wall Street bar explain the explosive rise and fall of big banking and big bankers.

In Act 1 (below), the two bankers meet for the first time, and fall in love with their financial futures. In Act 3 (above), one of the bankers looks back, years later, at the Big Bang origins of the universe and the Big Bank destruction of the financial system.

This mini-opera has music by L.v. Beethoven & G. Rossini, and words by Marc Abrahams. 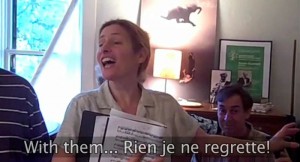 Starring Maria Ferrante and Ben Sears, and Branden Grimmett, it premieres October 1, 2009 as part of the 2009 Ig Nobel Prize Ceremony, at Sanders Theatre, Harvard University. It will be webcast live at improbablecom.wpcomstaging.com.

(This rehearsal happened at the home of Nobel Prize winner (Chemistry 1976) William Lipscomb. Professor Lipscomb and several colleagues will play a supporting role on stage in the premiere.)