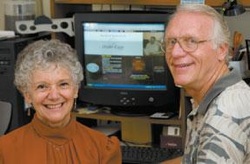 All of the judges agreed they’d never come across a product like Under-Ease, custom-made underwear for people whose digestive problems cause extremely smelly flatulence. And a couple of the judges admitted they were tempted to vote for the unusual product, which Weimer invented as an answer to his wife’s years-long struggle with flatulence related to Crohn’s disease.

“They loved us. They really did,” Weimer said. “They told us we should get in the business of happy marriages – which of course, we are – but they didn’t know that.”

So says a Pueblo Chieftain report about Buck and Arlene Weimer’s appearance on the TV game show ‘Shark Tank“.  The report explains that: “Each week the show pits six entrepreneurs and inventors against each other before a panel of real-life, self-made millionaires and billionaires who also started small. The winner each week receives money for startup and marketing costs”.

The  judges may not have been aware that Buck Weimer was awarded the 2001 Ig Nobel Prize in biology for  inventing Under-Ease. As you are probably well aware by now, Under-Ease is airtight underwear with a replaceable charcoal filter that removes bad-smelling gases before they escape.