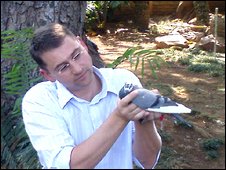 A Durban IT company attached a 4GB memory stick on the foot of an 11-month-old pigeon and let it race against the ADSL service from the country’s biggest web firm, Telkom. Winston the pigeon took two hours to carry the data 60 miles – in the same time the ADSL had sent 4% of the data. This ‘pigeonrace 2009’ was covered widely by the media.
Clearly, this experiment was inspired by a classic study published in AIR 11 [4] (July/August 2005) titled ‘Sluggish Data’.