The sad yet, in its own commemorative way, triumphant news of the death of Frederick J. Bauer, the man who designed the packaging for Pringles potato chips (and whose ashes were buried in just such a Pringles can?the man ultimately consumed, in his own design) brings to mind two of the great scientific endeavors that involved Pringles potato chips. The chips are famous for being identically shaped ? if you have mapped one Pringles chip, you have mapped them all. 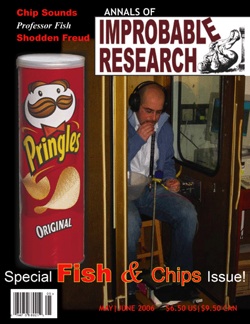 Not long ago, Charles Spence of Oxford University and colleague Massimiliano Zampini ?investigated whether the perception of the crispness and staleness of potato chips can be affected by modifying the sounds produced during the biting action.” For details, see our May 23, 2006 Guardian column, and for further details consult the special Fish & Chips issue of the Annals of Improbable Research (or just glance to your right here, to see Dr. Zampini?biting a Pringle?on the magazine cover).

Professor Spence will be appearing at the Cheltenham Science Festival this Wednesday night, June 4, discussing martinis. A gracious man, he will undoubtedly be amenable to discussing Pringles should you ask him. (The Ig Nobel Cabaret happens three nights later, on Saturday, June 7, also at the Cheltenham Science Festival. We do not know whether Professor Spence or his famous single Pringle will be present that evening.)

The other Pringles-related research recalled to mind if the study ” The Aerodynamics of Potato Chips” by Scott Sandford et al., published long ago in the very first issue of the Annals of Improbable Research, and reprinted in the book Best of Annals of Improbable Research. Dr. Sandford’s team did investigate the aerodynamic properties of Pringles, as well as of other chip types.

(Thanks to investigators Sally Shelton and Mary Kroner for bringing Mr. Baur’s historic passing to our attention.)