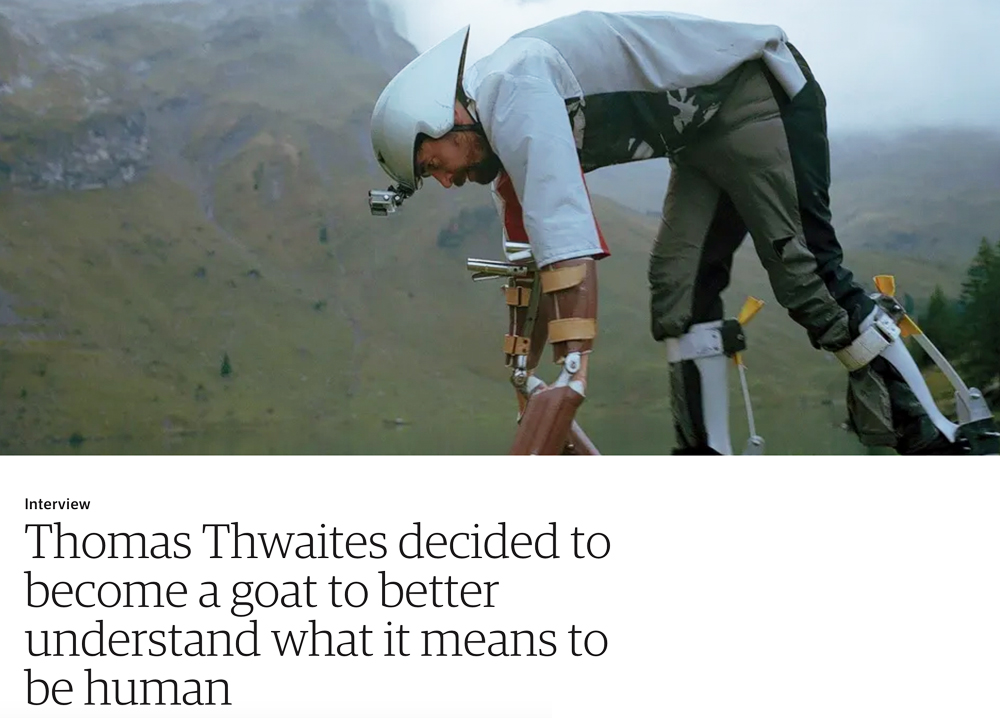 The human who, of all the humans who have tried living life as a goat has become the most celebrated by fellow humans, looks back on his experience. NRC interviews and profiles Thomas Thwaites, and also checks in with Charles Foster, who lived parts of his life as different kinds of animals. The NRC profile says, in part:

Their projects earned Foster and Thwaites a shared Ig Nobel Prize in 2016 , a science prize for frivolous-looking research that is nonetheless thought-provoking. And then there’s Geoffroy Delorme who lived for seven years with roe deer in a Norman forest ( L’Homme-chevreuil , translated in 2021 as The Deer Man ). And there’s David Abram’s book, Becoming Animal (2010), a philosophical exercise centered on the fact that we don’t see the world “as it is,” because our brains rapidly replace everything our eyes see with abstract “concepts.”

“It has undoubtedly to do with our seeking a new relationship with nature,” says Thwaites. What he and Foster have in common is their attempt to bridge the gap between humans and animals. “And we both realize how much comfort you have to give up when you try to live as a non-human.”

The 2016 Ig Nobel Prize for biology was awarded jointly to: Charles Foster, for living in the wild as, at different times, a badger, an otter, a deer, a fox, and a bird; and to Thomas Thwaites, for creating prosthetic extensions of his limbs that allowed him to move in the manner of, and spend time roaming hills in the company of, goats.

Each of them documented his experience in a book:

Charles Foster subsequently wrote another book in which he, like Thomas Thwaites, further contemplates the experience of being a human. That book is: Being a Human: Adventures in Forty Thousand Years of Consciousness, Charles Foster, Metropolitan Books, 2021