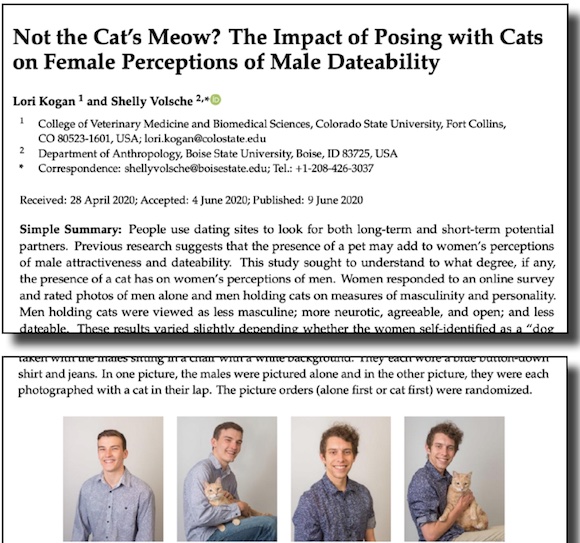 “Not the Cat’s Meow? The Impact of Posing with Cats on Female Perceptions of Male Dateability” [by Lori Kogan and Shelly Volsche, published in Animals, vol. 10, no. 6, June 9, 2020, E1007] is a featured study in “Cats Research: Girls, and Men and Datability“, which is a featured article in the special Women (and Men) issue of the magazine—Annals of Improbable Research. The study reports:

The aim of this study was to investigate whether men were considered more attractive when posing for a photo alone or holding a cat. Prior research suggests that women view pet owners as more attractive and dateable than non-pet owners; however, this effect was strongest with dog owners. We hypothesized that men posing with cats would be more attractive than those posing alone. Using an online survey, women viewed images of a man posing alone or with a cat and rated the men on the Bem Sex Role Inventory (BSRI) and the Big Five Inventory. Women viewed men as less masculine when holding the cat; higher in neuroticism, agreeableness, and openness; and less dateable.