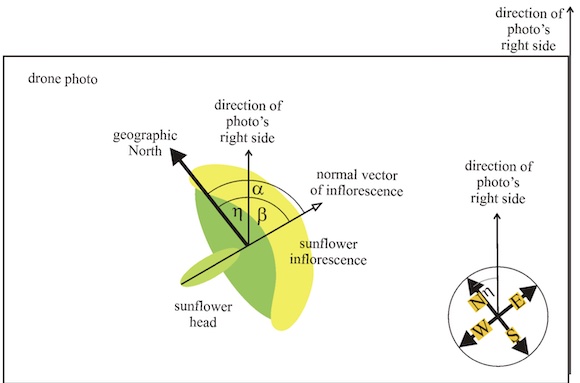 Sunflowers have the reputation of all being dedicated to facing the sun. An Ig Nobel Prize-winning team has now tried to measure how well that reputation matches reality. They dispatched some drones and some software to do this.

Mature sunflower (Helianthus annuus) inflorescences, which no longer follow the Sun, face the eastern celestial hemisphere. Whether they orient toward the azimuth of local sunrise or the geographical east? It was recently shown that they absorb maximum light energy if they face almost exactly the geographical east, and afternoons are usually cloudier than mornings. However, the exact average and standard deviation (SD) of the azimuth angle of the normal vector of mature sunflower inflorescences have never been measured on numerous individuals. It is imaginable that they prefer the direction of sunrise rather than that of the geographical east. To decide between these two photobiological possibilities, we photographed mature inflorescences of 14 sunflower plantations using a drone and determined the average and SD of the azimuth angle of the normal vector of 2,800 sunflower heads.

What they found is slightly (or more than slightly) complicated, as you will see if you dip into the study.

The team also looked at how well solar panels get a look at the sun. Details are in their new study “How the morning-afternoon cloudiness asymmetry affects the energy-maximizing azimuth direction of fixed-tilt monofacial solar panels,” published in Royal Society Open Science. (Thanks to Gabor Gadenics for bringing this to our attention.)

The 2016 Ig Nobel Prize for physics was awarded to Gábor Horváth, Miklós Blahó, György Kriska, Ramón Hegedüs, Balázs Gerics, Róbert Farkas, Susanne Åkesson, Péter Malik, and Hansruedi Wildermuth, for discovering why white-haired horses are the most horsefly-proof horses, and for discovering why dragonflies are fatally attracted to black tombstones.

They documented that research in the study: “An Unexpected Advantage of Whiteness in Horses: The Most Horsefly-Proof Horse Has a Depolarizing White Coat,” Gábor Horváth, Miklós Blahó, György Kriska, Ramón Hegedüs, Balázs Gerics, Róbert Farkas and Susanne Åkesson, Proceedings of the Royal Society B, vol. 277 no. 1688, pp. June 2010, pp. 1643-1650.