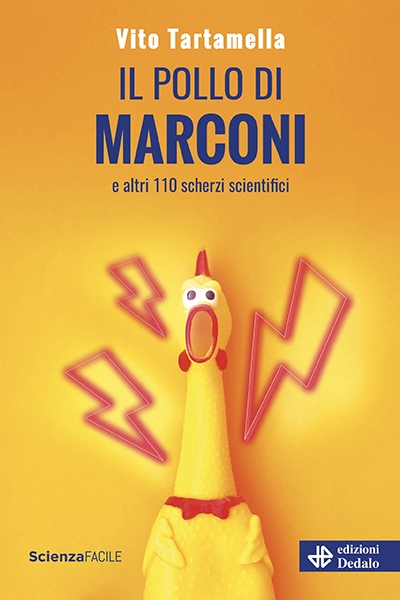 Il Pollo di Marconi (English translation: “Marconi’s Chicken”) is a new book that collects and savors pranks pulled by scientists (and/or their ilk). Journalist Vito Tartamella did the collecting and savoring. The book, which includes Tartamella’s own celebrated discovery of the stealthily published scientific papers by Stronzo Bestiale (English translation: “Total Asshole”), is in Italian.

Tartamella describes the book in an essay in the Italian news site Focus, and also, in English, in this note to us:

It’s the first historical essay about pranks made by scientists in the last century and over. For the first time I collected 110 pranks made by Nobel prize winners (Guglielmo Marconi, Enrico Fermi, Richard Feynman, Hans Bethe, Andre Geim), and other celebrities such as Benjamin Franklin, Nikola Tesla, Richard Branson, Enrico Bombieri, Thomas Edison, Isaac Asimov (when he was doing his doctorate in chemistry at the university).  I discovered that research institutions such as NASA, CERN, FermiLab, journals like Science, Nature, British Medical Journal, Scientific American, museums and laboratories all over the world had concocted sensational jokes in the last 150 years.