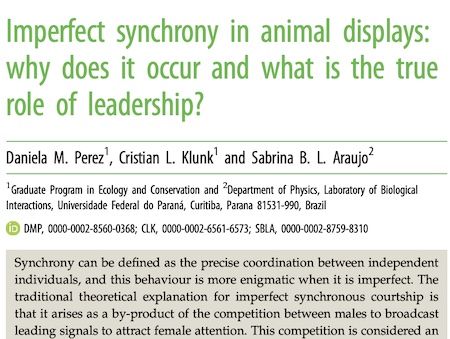 Klunk and colleagues have, perhaps, taken the lead in assessing imperfect synchrony in animal displays. There is much to ponder in their new study:

“Imperfect Synchrony in Animal Displays: Why Does It Occur and What Is the True Role of Leadership?” Daniela M. Perez, Cristian L. Klunk, and Sabrina B.L. Araujo, Philosophical Transactions of the Royal Society B, vol. 376, no. 1835, October 2021, 20200339. (Thanks to Tony Tweedale for bringing this to our attention.) the authors, at Universidade Federal do Paraná, Brazil, report:

“Synchrony can be defined as the precise coordination between independent individuals, and this behaviour is more enigmatic when it is imperfect…. We studied imperfect courtship synchrony in fiddler crabs to mainly test whether (i) signal leadership and rate are defined by male quality and (ii) signal leadership generates synchrony. Fiddler crab males wave their enlarged claws during courtship, and females prefer leading males—displaying ahead of their neighbour(s). We filmed groups of waving males in the field to detect how often individuals were leaders and if they engaged in synchrony. Overall, we found that courtship effort is not directly related to male size, a general proxy for quality. Contrary to the long-standing assumption, we also revealed that leadership is not directly related to group synchrony, but faster wave rate correlates with both leadership and synchrony.”