[NOTE: On September 22, 2021 we more or less solved the problem. See the end of this blog post for the happy news about that. The original blog post was written on September 13, while we were intensely wrestling with the problem.]

We have so far been unable to find a human at YouTube who can fix that. We recommend that you watch the identical recording on Vimeo.

Here’s what triggered this: The ceremony includes bits of a recording (of tenor John McCormack singing “Funiculi, Funicula”) made in the year 1914.

YouTube’s takedown algorithm claims that the following corporations all own the copyright to that audio recording that was MADE IN THE YEAR 1914: “SME, INgrooves (on behalf of Emerald); Wise Music Group, BMG Rights Management (US), LLC, UMPG Publishing, PEDL, Kobalt Music Publishing, Warner Chappell, Sony ATV Publishing, and 1 Music Rights Societies”

PROBLEM SOLVED (probably): (September 22, 2021) Still unsuccessful at making any contact with any human being at YouTube, we (think we) solved the problem by recording our own performance of the old song “Funiculi Funicula”, and then editing that into the video recording of the Ig Nobel Prize ceremony. The new musical performance is by soprano Maria Ferrante and accordionist/cardiologist Thomas Michel (both of whom also starred in the opera that was part of the ceremony).

Special thanks to Bruce Petschek, Richard Baguley, Julia Lunetta, Maria Ferrante, Thomas Michel, David Kessler, and Jeff Hermes for their time, effort, and wisdom at working around and thus (probably) overcoming the problem.

Here is the new version of the ceremony video:

And here is the original version (but living on Vimeo, rather than YouTube), that has the John McCormack 1914 recording of “Funiculi Funicula”:

FURTHER UPDATE (September 27, 2021): YouTube sent us this reply to our protest (we filed that protest when the problem happened, via YouTube’s web site, there being apparently no practical way to get in direct touch with any human at YouTube): 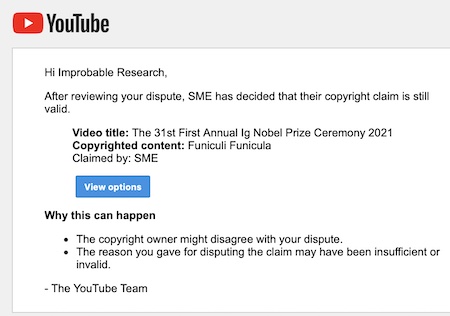