Julien Blondeau, who researches thermodynamics and fluid dynamics at the Vrije Universiteit Brussel, writes us about his most unusual research project:

I can now perfectly explain why, for instance, field hockey players score more than football players, although the fields have approximately the same size, the number of players is exactly the same, the goals are smaller and the games are shorter: it is because the ball moves faster. It sounds trivial, and that’s what make people laugh. 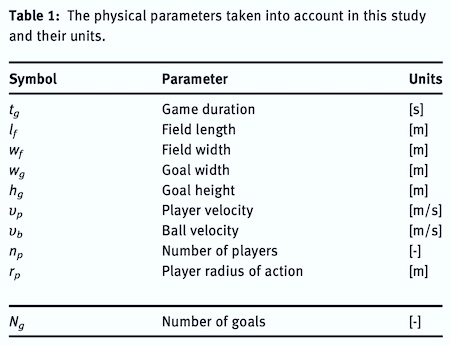 My son plays field hockey, while my son in law plays roller hockey. Roller hockey players obviously evolve much faster on their field. But they don’t score so much more than field hockey players. I happened to wonder why during a boring, Saturday afternoon game. I though this must also have something to do with the duration of the game, the size of the field, the size of the goals and the speed of the puck/ball. Thinking of the well-known “Pi-theorem” in physics, I therefore decided to seek a non-dimensional number (a relevant ratio, basically) that could explain the differences between all variants of soccer and hockey in terms of number of goals scored per game. I studied 8 sports: soccer, indoor soccer, beach soccer, field hockey, roller hockey, ice hockey, indoor hockey, hockey 5s. And I succeeded! I wrote a paper about it.

That paper is: “The influence of field size, goal size and number of players on the average number of goals scored per game in variants of football and hockey: the Pi-theorem applied to team sports,” Julien Blondeau, Journal of Quantitative Analysis in Sports, vol. 17, no. 2, 2021, pp. 145-154. It says:

In this paper, we investigate the correlation between the main physical characteristics of eight variants of football and hockey (such as field size, goal size, player velocity, ball velocity, player density, and game duration) and the resulting average numbers of goals scored per game….

[W]e propose a governing non-dimensional number based on the main physical characteristics of football and hockey that can be correlated with the average number of goals scored per game in their various forms.