Chernoff Faces, perhaps the most human way of presenting statistical data— the method was invented by Herman Chernoff, thus the name— gained extra expression in this later paper by Bernhard Flury and Hans Riedwyl:

“Graphical Representation of Multivariate Data by Means of Asymmetrical Faces.” Bernhard Flury and Hans Riedwyl, Journal of the American Statistical Association, vol. 76, no. 376, 1981, pp. 757-765. The authors, at the University of Berne, Switzerland, report: 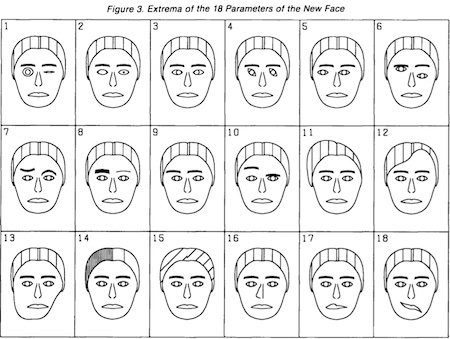 “Proceeding from the idea of Chernoff (1971, 1973) of representing multivariate data by faces, a new face is proposed in which the face parameters of the left and the right side can be varied separately. The new face can be applied in the same way as the usual Chernoff face (with 36 instead of 18 representable variables)…. Several examples illustrate these applications. Compared with Chernoff’s face, the new construction is more realistic, degenerates less, and avoids as much as possible mutual influences of the different face parameters.”

Edward Tuffte, the god of data presentation methods, wrote that asymmetrical Chernoff faces would “reduce well, maintaining legibility even with individual areas of 0.05 square inches as shown … with cartoon faces and even numbers becoming data measures, we would appear to have reached the limit of graphical economy of presentation, imagination, and let it be admitted, eccentricity”.