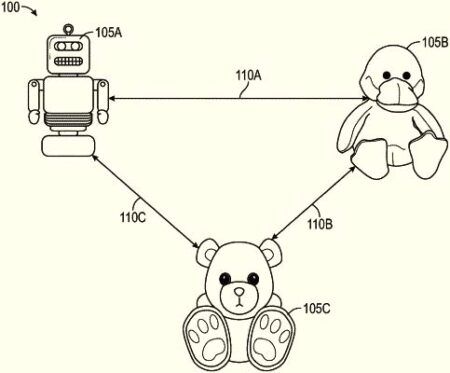 “Toys and characters often have prerecorded phrases or audio effects that can be played to increase the immersion for users who interact with the character. For example, some toys have pull strings, push buttons, and the like that triggers one or more prerecorded sound effects.”

The new aspect of the invention is that the toys no longer just ‘talk’ to their human companions – they can now chat amongst themselves too. And tell each other jokes.

Note: The patent document has some nice examples of somewhat-longer-than-normal sentences – which, for reasons not yet entirely clear, are much beloved of patent document compilers. For example :