Ants were in use as miniaturized characters in Brazilian nativity scenes until at least the 1960s. 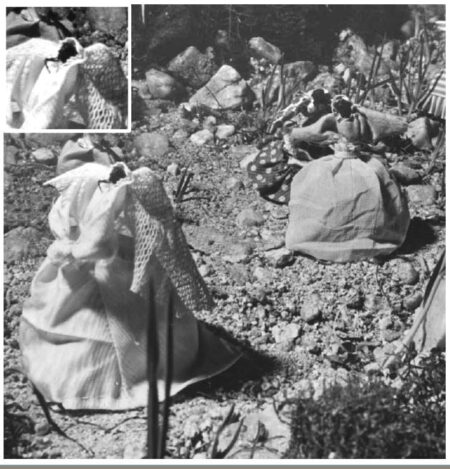 “Present in Brazil since the beginning of Portuguese colonization, crèche nativity scenes were soon adapted to local reality, a propitious circumstance for the appearance of heterodox conceptions and the use of exotic elements of the fauna and flora peculiar to each region. As records about insects are very uncommon, it is noteworthy that females of leaf-cutting ants, Atta sp. (Hymenoptera, Formicidae), were used to compose crèche nativity scenes in São Paulo State.”

The authors of a research paper on the subject, which was published in Anais do Museu Paulista: História e Cultura Material, 16(2), 105-127, suggest that the custom of Nativity-scene ant-dressing may have links with the work of Jules-Victor-André Martin (1832 – 1906) the painter, teacher, architect, lithographer, cartographer, draftsman, builder and Brazilian businessman of French origin, who had a penchant for depicting dressed-up ants in his artworks.

(Many thanks to investigator Phillip Schuster of the Universidade Federal do Paraná, Curitiba, Brasil, for bringing the paper to our attention.)