If you savor the savoring of bullshit, here are two useful essays. Each was published in The Last Word on Nothing:

“The Pocket Guide to Bullshit Prevention” by Michelle Nijhuis. The ‘Pocket Guide’ includes this graphic: 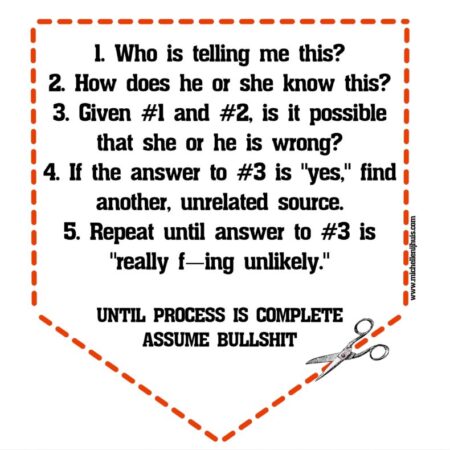 Related: Some Ig Nobel Prizes for the savoring of bullshit

Several Ig Nobel Prizes involve the appreciation, analysis, and savoring of bullshit. Ig Nobel Prizes, please remember, are for things that make people laugh, then think. Here are three of those prizes:

The 2016 Ig Nobel Peace Prize was awarded to Gordon Pennycook, James Allan Cheyne, Nathaniel Barr, Derek Koehler, and Jonathan Fugelsang for their scholarly study called “On the Reception and Detection of Pseudo-Profound Bullshit”.

The 2016 Ig Nobel Psychology Prize was awarded to Evelyne Debey, Maarten De Schryver, Gordon Logan, Kristina Suchotzki, and Bruno Verschuere, for asking a thousand liars how often they lie, and for deciding whether to believe those answers.

The 2020 Ig Nobel Prize for Medical Education, also, is about the savoring of bullshit, many people say. That prize was awarded to Jair Bolsonaro of Brazil, Boris Johnson of the United Kingdom, Narendra Modi of India, Andrés Manuel López Obrador of Mexico, Alexander Lukashenko of Belarus, Donald Trump of the USA, Recep Tayyip Erdogan of Turkey, Vladimir Putin of Russia, and Gurbanguly Berdimuhamedow of Turkmenistan, for using the Covid-19 viral pandemic to teach the world that politicians can have a more immediate effect on life and death than scientists and doctors can.