A Study to Study

The study is: “I’ll Show You Mine so You’ll Show Me Yours: Motivations and Personality Variables in Photographic Exhibitionism,” Flora Oswald, Alex Lopes, Kaylee Skoda, Cassandra L. Hesse, and Cory L. Pedersen, Journal of Sex Research, vol. 57, no. 5, 2020, pp. 597-609. (Thanks to Sarah Larsen for bringing this to our attention.) The authors, at Pennsylvania State University, Kwantlen Polytechnic University, and The University of British Columbia, explain:

“The purpose of this study was to investigate differences in the motivations, personality aspects, and sexualities of men who send unsolicited genital images relative to men who do not send such images. Within our sample of 1,087 heterosexual males, 48% (n = 523) confirmed that they had engaged in sending unsolicited dick pics, suggesting that this behavior is common amongst heterosexual men…. [Our] findings are consistent with previous literature indicating that men often send such images in the hopes that the recipients will be turned on by the images and reciprocate the behavior.”

A Book to Look At 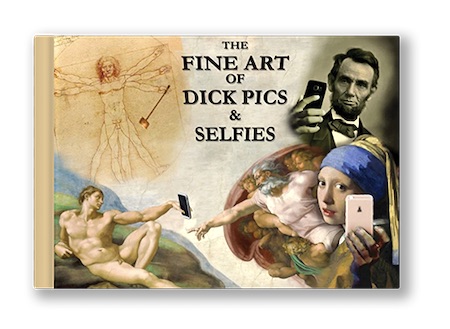 BONUS: The author will play a small but vital role in the 30th First Annual Ig Nobel Prize ceremony.