Cormorants are showering shit upon limousines that park unwisely in one particular spot in Rotterdam. Kees Moeliker, ornithologist, director of the natural history museum in Rotterdam, and Ig Nobel Prize winner (for discovering homosexual necrophilia in the mallard duck), writes about it in the Dutch newspaper NRC. Here is a machine-translation into English:

Thanks to its favorable location just outside the paid parking zones and close to metro station Kralingse Zoom, the ‘s-Gravenweg in Rotterdam is a favorite place for long-term parkers. The neat neighborhood does not like it, those cars that probably do not pass the MOT and also take up space. The nuisance has recently been combated biologically with a powerful weapon: the shitting cormorant. 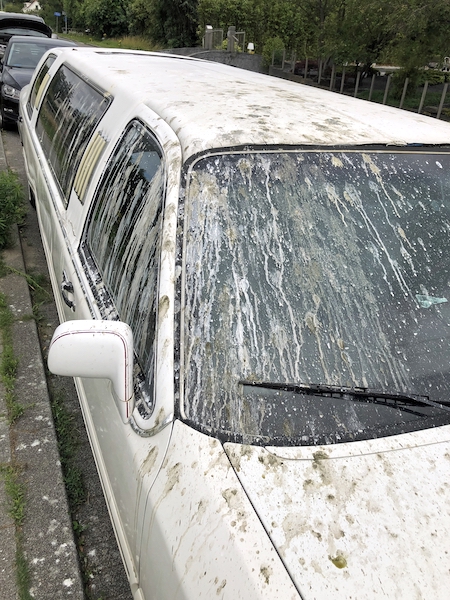 These large, black waterfowl settle on the light poles along the way, dry their wings in the wind, brush the feathers and do nothing more than digest the last meal and relieve themselves frequently. Twice an hour of careful observation yielded a total of seven flares per cormorant – huge blobs of bird droppings that always hit their target. The volume is large because birds discharge their waste through one outlet – the cloaca -: the urine is white and watery, the stool usually dark and always viscous depending on the food choice.

Local residents know the birds and their behavior and in particular avoid the infamous light poles 209 and 307. The ignorant wretches who park their car right under those lampposts find their vehicle completely undercut. After a day they can rinse the mud in the car wash again, but for long-term parkers the shit accumulates into a thick guano crust that can only be removed with the high-pressure sprayer and scouring sponge. A Fiat Panda (model Young) from 2001 changed from a crazy cart to a smelly wreck, and I had to look with sorrow at how the linen hood of a dark blue Saab convertible was whitewashed. Currently there is a white limousine under pole 307. With a length of almost six meters, it occupies two parking spaces and the cormorant has a double chance of hitting. 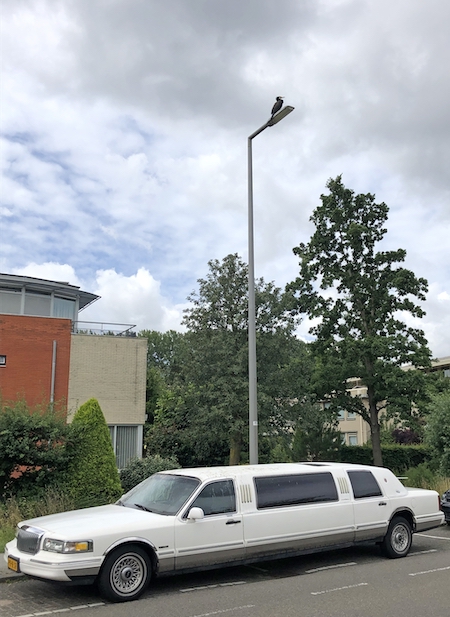 Although no one disputes the unsightly effect of bird droppings on cars, the damage caused by feces to the body is still a lot of misunderstanding. The car cleaning industry persists in the myth that uric acid from bird droppings affects the paint, but that chemical substance is converted by birds before feces reach the exit. The devil is in the enzymes and other proteins in the poo that degrade the paint in full sun (at high temperature). At the nanoscale, craters can even be seen in the top layer. Those holes can be closed again with the right polish. Better advice is: Look up before you park!