Fingerless gloves, in one form or another, have been around for a very long time. But the reverse, a glove that has only fingers has only recently been invented. US-based inventor Adam Walker has come up with a device that sidesteps the time-consuming and (sometimes) difficult process of putting on (and taking off) a pair of gloves. 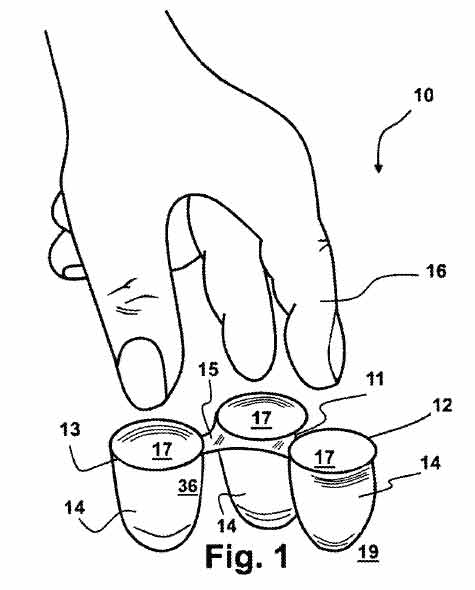 “[…] the use of gloves conventionally requires the time-consuming engagement of each of the individual fingers of the hand, along with the palm of the hand, within the glove itself. Such can be frustrating for example in the case of tight plastic or polymeric gloves, and for tight fitting fabric gloves. Further, there are many occasions where the wearing of gloves to shield fingers from a surface, or enhance the grip of fingers with such a surface, requires more time to engage the gloves, than the temporary contact, by a plurality of fingers with the anticipated surface, is worth.”

Not only that – says the patent – unlike traditional gloves, they’re stackable.

“The glove device can be formed in stacks of adjacent glove device bodies where each has covering sections engaged within the axial cavities of another of the stack.”