How to get people to pay more attention to NOT touching their eyes, nostrils, or mouth?

We invited people, in a gathering, to say “FACE” whenever they saw a speaker touching a hand to their face. And most of those people said “FACE”, cheerily—appreciating that they were talking to themselves as much as to the person who was at that moment doing the face-touching. 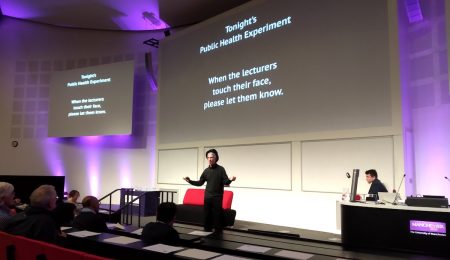 You can experiment with this tiny technique, if you have to be in meetings of any kind during this time of pandemic. (If you work in a hospital or other healthcare setting, the technique might be a gentle, smiley-face inducing way to get patients and their families to alter their eyes/nostrils/mouth touching habits.)

Here’s how to do it:

The technique—inviting people in a group to say “FACE”—is gentle, yet firm. Please feel free to try it.

We first tried this in a show at the University of Manchester, UK, on Wednesday evening, March 11, 2020. It worked. People paid more attention to NOT touching their eyes, nostrils, or mouth

This photo was taken by Herbert Crepaz, the final speaker in the show, as he was watching the first speaker speak.

That show, with an audience of 500 or so people, may have been the last public gathering to happen at the university until the corona-virus pandemic has burned itself out.

That show also was the first, and as it turned out, the only show on this year’s Ig Nobel Euro (and Brextannia) tour.

As mentioned above, “face touching” advice is mostly about touching eyes, nostrils, and mouth.

Forehead, cheeks, and chin are located, metaphorically and perhaps also physically, on a slippery slope to those eyes, nostrils, and mouth.

Here’s an illustration from “Face touching: A frequent habit that has implications for hand hygiene,” one of the few biomedical papers specifically about face touching:

A Science Question: How Medically Effective Is the Advice?

How good—good at preventing the spread of disease—is the advice to not touch hand to eyes, nostrils, or mouth?

We asked several biomedical researchers in three “the” countries (the USA, the UK, and The Netherlands). Each of them is a renowned physician who both treats patients AND does research. Each is based at a medical institution widely recognized as being among the world’s very best.

Here are representative opinions from two of those physician/researchers:

OPINION: “It is critical. Face touching—at all orifices and the eyes—needs emphasis as a medium for transmission of infectious diseases. Viruses are in or near facial orifices normally along with various bacteria and fungi. Transmission of virus from hand to facial orifice is a major route of infection. CDC is not just giving people something to do…. like witchcraft. Washing hands and not touching face will not end the pandemic, but the experts inform us the the disease may be slowed considerably.”

OPINION: “The Infectious Disease people I work with do seem to believe that this is correct advice, although I don’t know the evidence base. Nearly everyone I have discussed this with says, not that it isn’t effective—just that it is impossible. You have probably seen this compilation of news video of officials touching their faces.”

The entire above discussion is about the question: How medically effective (a lot? a little? hard to quantify?) is one very specific piece of medical advice.

Some things, many things, in fact, are difficult to measure.

And now for something completely different: Other, Aggressively Bad, Dangerous Advice

Let’s now look at some OTHER advice, that comes from far less reliable, but very loud and visible, sources.

Some of the OTHER medical advice raises—or should raise—a very different question.

That OTHER advice begs this question: How can you recognize advice that is aggressively bad, and dangerous?

There is plenty of aggressively bad, and dangerous advice being spewed by particular public officials.

And there is plenty of aggressively bad, and dangerous advice being spewed by particular propaganda organizations that disguise their propaganda, calling it “news.”